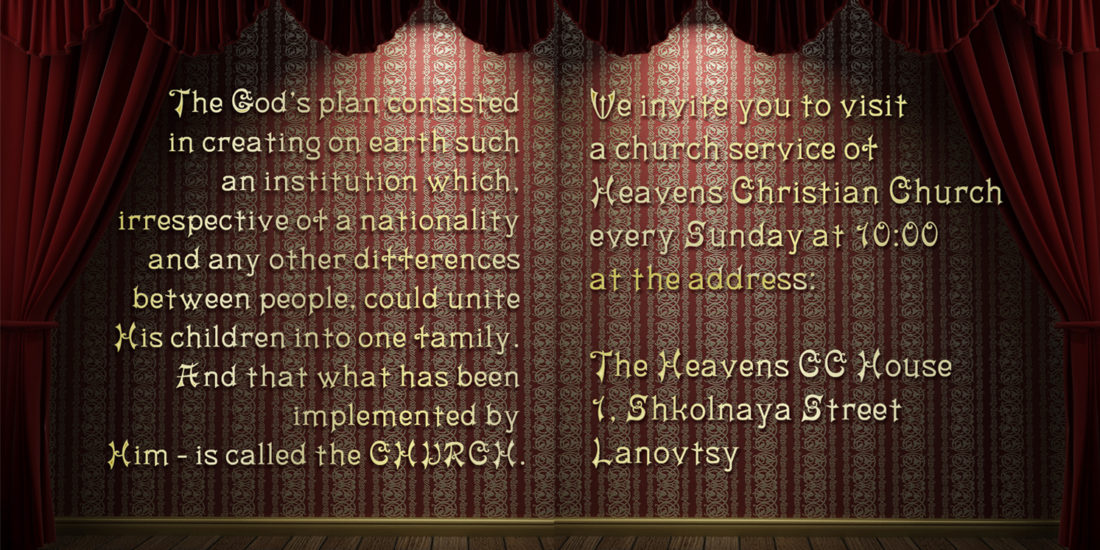 “… here, on the earth, there is going on the scariest of wars, in which there is never a truce. It is nothing else but a war with the devil himself who secretly and imperceptibly tries as if to exhaust the cities and kingdoms, and to completely deprive them of courageous and best people until he completely eats away a kernel and leaves a shell alone full of villains who will be only puppets in his hands, – for his pleasure. Afterwards your city and your country will experience the real hunger, and without the slightest fight, without noise and any prevention they will be destroyed from within”. (Martin Luther)

The task of the Church is a demonstration of the God’s Kingdom on earth!

“Let Thy kingdom come; let Thy will be done, as in Heaven so on earth” (the Our Father prayer)

“By the blessing of the upright the city is exalted: but it is overthrown by the mouth of the wicked” (Proverbs of Solomon 11:11)

“And seek the peace of the city whither I have caused you to be carried away captives, and pray unto the Lord for it: for in the peace thereof shall ye have peace” (Jeremiah 29:7)

The status of the city depends on whom people worship in it!

There are different kinds of spiritual strongholds in cities or villages which can control people and hold them in captivity:

Therefore, the role of the church is in proclaiming the God’s prophetical word for the city, its inhabitants, the land and all branches of the power, and, having taken responsibility, to pray for them before God with an intercessory prayer.

The church is a big family where there is a place for everyone who will make the decision to become a part of it!