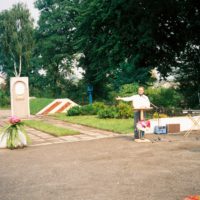 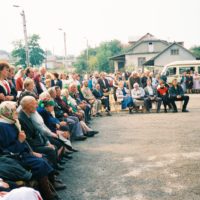 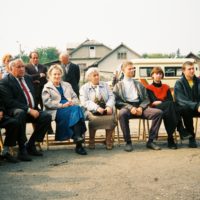 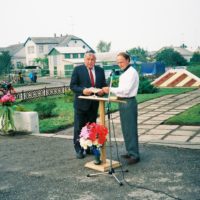 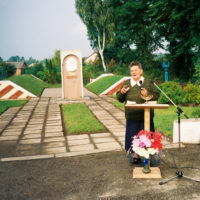 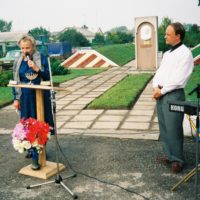 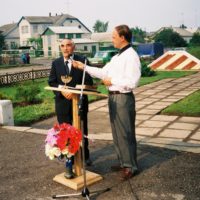 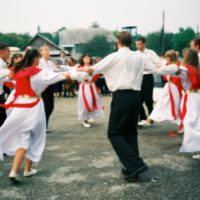 BEFORE GOD FOR GUILT OF INHABITANTS OF LANOVECHCHINA OF ALL PAST GENERATIONS INVOLVED IN TREACHERY, TORTURES AND MURDERS OF THE JEWS ON OUR LAND

The 26th of September, 1999 was a significant day for Lanovechchina’s inhabitants. This action was the first one in Ukraine, and it required a lot of efforts to conduct it. On that place where 2500 thousand Jews had been shot, several hundreds of people gathered that day. On the invitation there were heads and members of the Jewish community of Ternopol.

After declaration of a repentance prayer the Appeal had been signed which was handed to Head of the Jewish community in Ternopol and sent to Ambassador of the State of Israel to Ukraine.

Dear Mr. President of the State of Israel,

Prime minister, members of the government and the Parliament.

Dear priesthood and all Jewish people

Turning over the pages of history of our region, on the eve of the new millennium, our generation should sum up the result of our past.

It happened so that the destiny of the Ukrainian people had been throughout many centuries closely bound with the destiny of the Jews who had lived and, partially, still live on our lands. Together we had to share grief and joy, wars and famine, defeats and victories. But similarly there were left forever in history innocent sufferings and the death of those in whose veins the Jewish blood flowed. It can’t be hidden and forgotten – thousands and thousands of them had been cruelly annihilated by the fascists. Today we consciously want to admit that certain representatives of our people were involved in it as well. Surely, not all the people, and even not the majority because there were also many of those who, risking their lives, had been saving the doomed to death adults and children.

In Ukraine the present generation of its inhabitants realizes that the guilt of past crimes, committed over the Jews, still lies on all our people. Entering the new millennium, we don’t want to leave on ourselves the sin of Ham and his descendants.

Therefore, this day we bow our heads and hearts low before The Most High God and ask His forgiveness for all that past evil which has been ever done by our ancestors to His people.

Before all the Jewish people, its priesthood and the power we apologize for all past oppressions and persecutions caused to you on the side of our Ukrainian people, consciously or unconsciously, or compulsorily.

Thereby today our generation pledges in future history of the relations between our people the symbolic Stone of Peace.

“And I will bless them that bless thee, and curse him that curseth thee: and in thee shall all families of the earth be blessed”(Gen.12:3). These words have a direct relation to the Jewish people. Of course, among the Jews, as well as among other nations, there are different people, but this is not a matter of some personal sympathies. We are to believe the God’s Word and understand that our attitude to this people has the inverse effect on our destiny.

One should say that it concerns the disdain not only for the Jews, but also for one’s own or for any other nation. We are against xenophobia. In general, any humiliation of other person irrespective of who he is is a challenge to the One Who has given life to this person.