Act of the christian unification

The Historical Act of the Christian Unification

On July 25, 1992 in the editorial office of the Seyatel (Sower) newspaper there took place “the round table” with participation of ministers of the orthodox and evangelical confessions, power officials and media representatives.

The purpose of this meeting was to lay the fruitful foundation of interfaith stability and religious consent in the region, so that in all Christian churches there always sounded the sermons penetrated with the idea of peaceful co-existence, a truly Christian idea. The audience had arrived at the general idea that the efforts of the Christians of our region should be mainly aimed at preserving peace, raising up the national culture, developing spirituality.

As a result, participants of the meeting had made up the appeal to different confessions of the region. 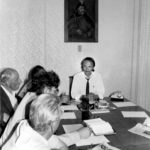 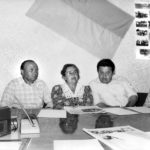 to Christians of orthodox and evangelical belief, other confessions in the region and in Ukraine.

Dear Christians, brothers and sisters! We are witnesses of the fact how thousands and millions of people in different corners of the world, having endured serious consequences of international and interreligious strife, join the ranks of fighters for peace between all the nations.

The Christian church with all its branches is a huge collective. And participation of such a community in any matter has an enormous value for success of this matter. The Christianity is guided by the precept of its Teacher Christ Who said: “So let your light shine before people that they can see your good deeds”.

Dear Christians of orthodox and evangelical churches, all other confessions of the region!

In hard times of revival of our Ukrainian state, giving hands to each other, we are to do our best to preserve peace, to raise national culture, to prevent lechery and thirst for violence which are overwhelming our youth. We will be able to reach all this only by following God’s commandments the basis of which is LOVE.

Personal beliefs which every person believing in God has the right to, the methods or traditions of conducting services in different churches shouldn’t create misunderstanding, hostility or disrespect between us. For we all consider ourselves children of God, as well as children of one Ukrainian nation. We live on one earth which feeds us with its gifts. We breathe one air, are warmed up under one sun and are freshened up with one heavenly rain. All this is the creation of our one living God Whom we all believe in and read his Word, Whom we pray to and receive the answers.

All Christians know on the basis of the Bible that God is the Father of mankind, but not all of them strive for mankind to become one family. So let us lift higher the banner of love for all people of the world to see that we are real Christians capable of doing our best for mankind’s benefit.

Let the slogan of our Christian churches be the motto: “LOVE between all people”. That’s why the preaching of the idea of people’s peaceful co-existence as the idea truly Christian, truly evangelical should sound in all Christian churches.