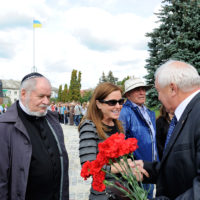 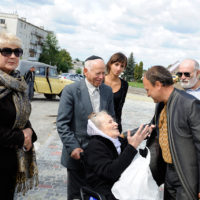 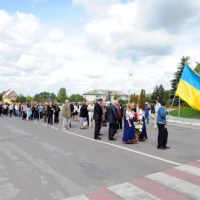 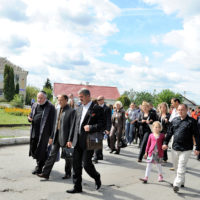 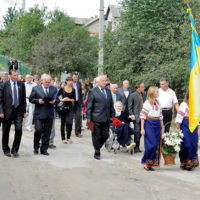 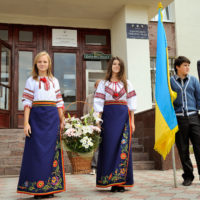 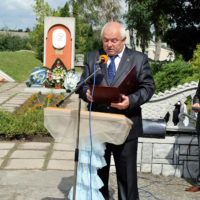 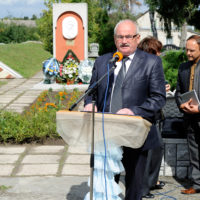 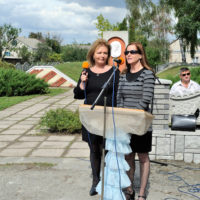 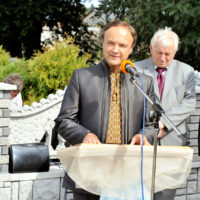 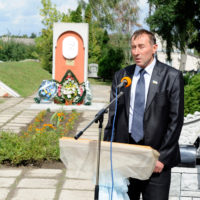 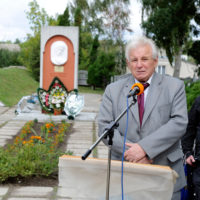 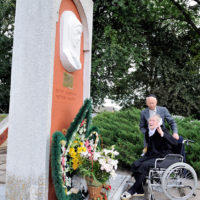 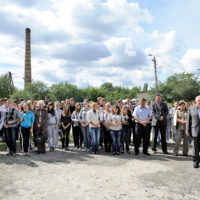 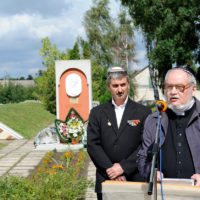 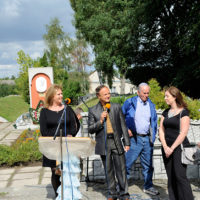 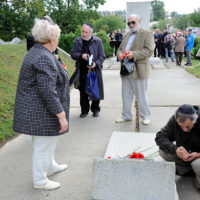 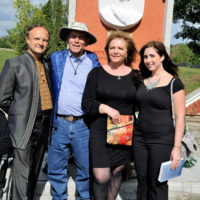 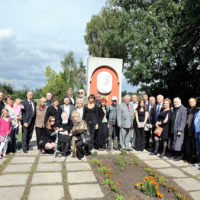 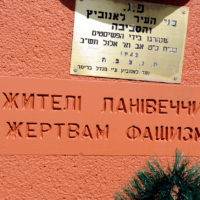 In Lanovtsy near the mass grave in which bodies of the Jews killed by fascists were buried, there took place the meeting-requiem dedicated to the 70th anniversary of execution of the Jewish population from the local area.

About 400 people gathered on the central square of the city to honor the victims of the Nazi regime.

Just where the modern center of Lanovtsy is there in 1942 ghetto was organized. From here participants of the meeting marched in an orderly manner down that street the Jews had been led along to the execution yard. This action was organized by Doctor of Theology, director of Heavens Christian center Vladimir Androshchuk. He had been engaged in charitable and educational activity in Ukraine and beyond its borders for more than twenty years.

“While we remember the victims, we are the people. For the people exists only when there is memory of the dead and thoughts of future generations, – mister Vladimir noted. – When memory of the dead is consigned to oblivion, when they dance on the graves, when future generations are left with the devastated, scorched land, then the people disappears. There remains the population in which chaos and entropy reign. Today we have once again testified that we are the people”.

The city and regional authorities actively joined holding this event.

“It was a crime against humanity, against mankind”, – Head of Regional State Administration Victor Morozyuk pointed out in his speech. Among those who also spoke at the event were Head of Regional Council Alexander Blazheychuk, Lanovtsy City Head Ivan Tkachuk, a famous writer and Lanovechchina’s native Vassil Folvarochny, as well as the representatives of the Jewish community who had arrived to bow to the graves of their parents and relatives. Among them there were a coordinator of the project entitled The Memorial Book of the Martyrs of Lanovtsy Who Perished During the Holocaust Sol Sylvan (Washington), a relative of the perished Lanovechchina inhabitant Tatyana Meyler (New York City), a member of the Ternopol Jewish community Dora Yanovna who had miraculously survived during execution. The prayer was said by the assistant to the Senior Rabbi of Ukraine Siwa Vladimirovich Faynerman and Head of the Jewish community of Ternopol Igor Romanovich Bazenchuk.

It is important to note that the mass grave and the Jewish cemetery in Lanovtsy are among the best preserved ones in Ternopol region. For more than ten years Heavens mission has been engaged in this cemetery’s improvement. Thus, on the eve of this event, the new fencing has been set up at the cemetery.

Vladimir Androshchuk explained why there were so many Jews in Lanovtsy. As it turned out, in the neighboring cities, such as Kremenets, Yampol, Dubno, Vyshivets which had once been the property of Polish Counts, the Jews were less protected, they were exposed to constant insurgent attacks. The Jews in Lanovtsy were protected by the Yalovitsky’s family. This family was a black sheep among the Russian nobility because of its liberal views. The Yalovitskys supported and protected all minorities, regardless of their belief and nationality.

At the end of the 19th century Lanovetsky Settlement Head Mr. Averbukh sent round across Volhynia and Podolia the flyers in which he praised the highly favorable conditions of life and work in Lanovtsy. Whole Jewish families began to move to this city for residence. Over time there had been formed and began to increase the so-called society of local intellectuals: teachers, businessmen, doctors, spiritual mentors. At the beginning of the 20th century in three synagogues were built in Lanovtsy. One was the central big two-storied building and two smaller ones. According to the data of the 1847 census in Lanovtsy there lived 523 Jews. And 50 years later, in 1897, there were already 1774 Jews (out of 2525 residents of the city).

After Lanovtsy’s occupation by Germans they began to create in the Jewish quarter of the town (the modern center) in August, 1941 a ghetto – the closed quarters for the Jews’ accommodation. And in February, 1942 by order of the local German authorities they began to transfer the Jews there. The elderly people, eyewitnesses of those terrible events, told that they would hear cries of pain and despair, weeping of women, elderly people and children, as well as angry shouts of the German soldiers.

According to the Soviet archives, this ghetto accommodated about 5000 Jews who were taken from Belozerka, Vyshgorodk, other villages. In early days of September, 1942 the German occupational authorities gave the order to annihilate all the prisoners of the Lanovetsky ghetto. The final journey of Lanovtsy residents of the Jewish nationality was along Ukrainskaya St. On the outskirts of the town 3587 people had been shot, 1.5 thousand more had been sent to Vishnevets and liquidated there too.